Nazaré, December 10, 2014. The ocean was quiet. The town was quiet. He checked in to a hostel where he was the only guest. An hour later a Swiss guy entered. “Are you here for the surf?” Another guy entered. Same question. The next morning the three of them were up before dawn. And all hell broke loose.

These guys, although in Nazaré for the waves, would leave their surfboards in the hostel today. In Nazaré ‘being here for the surf’ does not necessarily mean surfing. Praia do Norte, just north of the village, is home to some of the biggest waves in the world. For most of us earthlings ‘being here for the surf’ means spectating, watching in awe, letting your mind be blown away and feeling a nervous fear just seeing surfers out in the ocean in 100-foot waves (30+ meters). Men with balls of steel and girls with, well, the same (remember Maya Gabeira?).

That was exactly what Jop Hermans, a Dutch photographer, was doing in Nazaré that day. A few days before, he’d landed in Lisbon with his surfboard, brand new camera gear and a travel schedule that was not especially well-defined.

Although the hostel where he resided made big announcements about the probability of a big wave spectacle soon in Nazaré – really, it is a big deal in Portugal, busloads are moving in by the hour into the small seaside town when it’s on – but no-one was exactly sure when. Familiar with surfing forecasts and the fact that a large groundswell was approaching, Jop tried his luck and drove north on Wednesday.

Thursday morning he stood with his new two buddies and some 14 other men, watching the ocean from the lighthouse, as the sun was about to rise. Those 14 others weren’t just any other men; among them were Portuguese António Silva, German Sebastian Steudtner, British Tom Butler and American McNamara. The ocean was pumping. Yes, you guessed it, those other guys were there to actually surf the monster waves that were breaking down below. 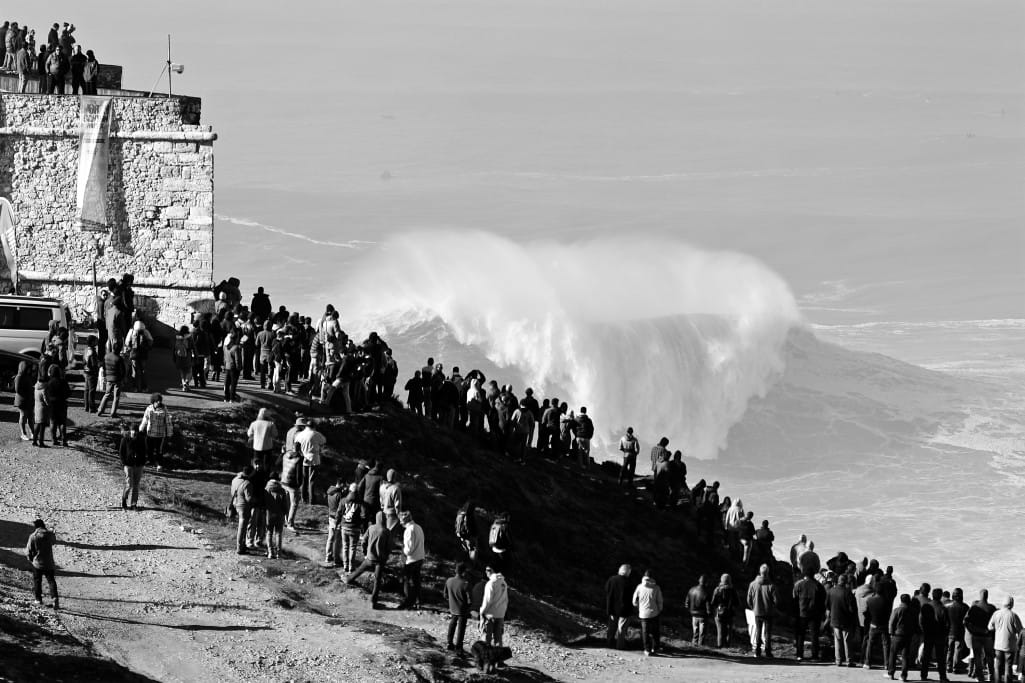 “It was fascinating to see how those guys handled it” says Jop, “Big wave surfing isn’t just riding a big wave, it’s not just wiping out in some white water when you don’t make it. It’s a huge amount of waterpower and big wave surfers risk their life, every time they go in. The wave in Nazaré is a strange shape, not like other big waves. Not a hollow curl, it’s a big, steep mountain of water. That’s why the ride is so long. You would expect the surfers to be nervous and anxious, but in fact they were very relaxed. They told me how they try to measure things, like tracing the exact spot for the tow-in scooters to exit, what angle the waves break, rule out risks as much as possible in order to be safe. “

It sounds contradictory, but apparently it’s a calculated risk.

António Silva, who rode the biggest wave that day, said in an interview with Surfer Today: “I am very happy for having ridden that wave, but I’m even more happy for handling the next three. It was sinister, but I managed to endure it,”

And as for the onlookers, the hundreds of spectators who, like Jop, came to watch that day, it was exhausting. Jop: “At the end of the day I was worn out, dead tired, just by looking at those men in these monster waves. It’s such a thrill, you feel the energy, the excitement, the fear, the risks taken. 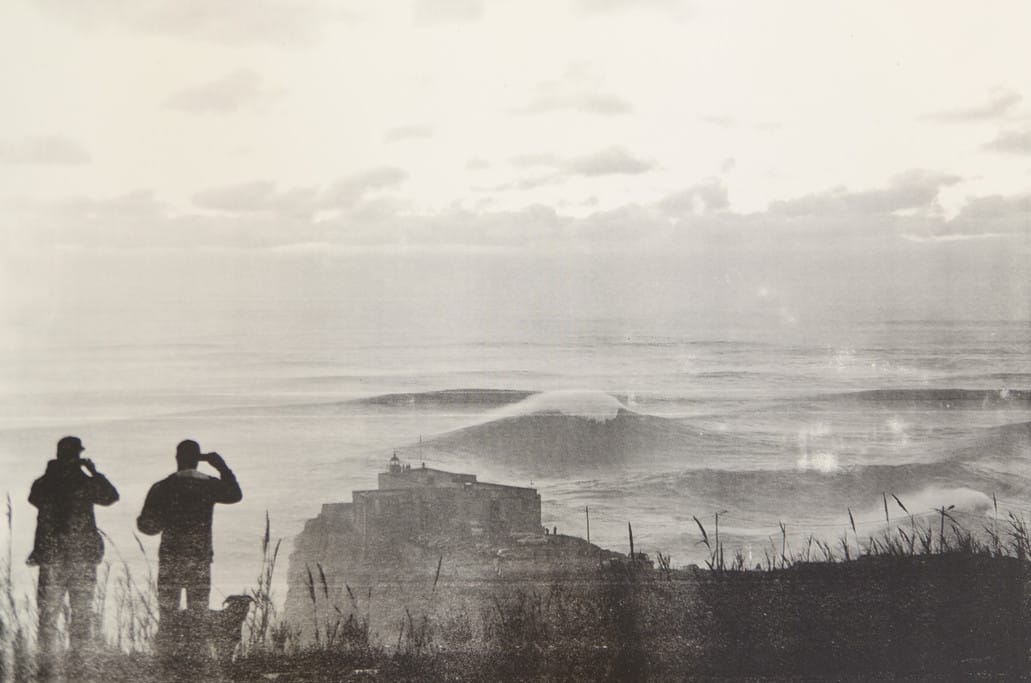 ‘The Edge of the World’  printscreen by Jop Hermans

As a photographer he’s trying new things all the time, like taking up the craftsmanship of screen-printing his photographs, with this beautiful result (see above).

You can order one of the limited editions of this screen-print of Nazaré ‘The Edge of the World’
For further information contact jophermans.photography(at)gmail.com

Sorry, the comment form is closed at this time.

Seaside news, travel inspiration and discounts straight to your inbox?

Shopping cart
There are no products in the cart!
Continue shopping
0